Read the text and questions below.
For each question, mark the correct letter A, B, C or D
Being an Older Student 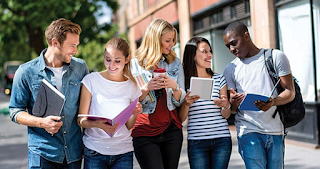 At 32, I have just finished my first year at university. As well as attending lectures regularly, I have had to learn to read books quickly and write long essays.
I decided to go to university after fourteen years away from the classroom. As a secretary, although I was earning a reasonable amount of money, I was bored doing something where I hardly had to think. I became more and more depressed by the idea that I was stuck in the job. I was jealous of the students at the local university, who looked happy, carefree and full of hope, and part of something that I wanted to explore further.
However, now that I've actually become a student I find it hard to mix with younger colleagues. They are always mistaking me for a lecturer and asking me questions I can't answer. I also feel separated from the lecturers because, although we are the same age, I know so much less than them. But I am glad of this opportunity to study because I know you need a qualification to get a rewarding job, which is really important to me. Unlike most eighteen-year-olds, I much prefer a weekend with my books to one out partying. Then there are the normal student benefits of long holidays and theatre and cinema discounts. I often have doubts about what I'll do after university, but I hope that continuing my education at this late date has been a wise choice.
Quiz 
CÓ THỂ BẠN QUAN TÂM