Read the text and questions below.
For each question, mark the correct letter A, B, C or D
Maria Mutola
Former 800 metres Olympic champion 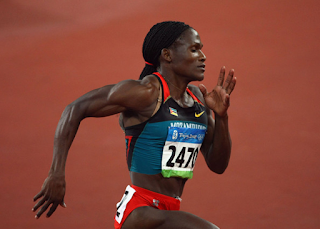 In 1988, Maria Mutola was playing football as the only girl in an all-boys team in a local competition in Mozambique. 'We won,' she said. 'At first no one thought it was a problem that I was a girl. But then the team we beat complained.'
The story appeared in a local newspaper and José Craveirinha, who had encouraged other African athletes, learnt about Maria. He went to meet her and found her kicking a ball around outside the football club. He realised immediately that she was fast. 'He talked to me about athletics. I had no idea what he meant. The only sport I knew about was football. Then he bought me running shoes and took me training. It was such hard work and my legs really ached.' But José visited her parents and persuaded them she could be successful and this would help end their poverty. They agreed to let him take her away to train.
In 1991, she finally accepted an invitation to train in the United States. She had refused previously because she knew she would miss her family. Her background was unlike those of the girls she met in the US. She explains, 'They were good athletes but, while I worried about my parents having enough to eat, they worried about dresses and make-up. They knew very little about me and even less about my problems. But I knew I was lucky to be there. The trainers were brilliant and I learnt a lot.'
Today, Maria still runs and for most of the year she lives happily in South Africa with her mother.
Quiz 
CÓ THỂ BẠN QUAN TÂM