Read the text and questions below.
For each question, mark the correct letter A, B, C or D
Gareth Ellis 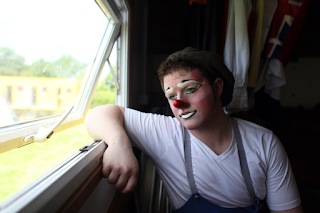 Gareth Ellis, 13, is the youngest son of Alan, an engineer, and Kath, a nursery teacher. His older brothers work in banking and computers, but Gareth's dream was always to become a clown. Three years ago, Alan, Kath and Gareth joined the circus. 'People laugh when we tell them,' says Kath. 'But it's true. Gareth has wanted to be a clown since we took him to the circus when he was three.'
When Alan lost his job, he and Kath decided to see if they could find full-time circus jobs. They both got jobs with a famous circus and Gareth began training to become a clown. He calls himself Bippo. They travel with the circus during the summer and return home for the winter. Gareth's brothers are old enough to look after the house while they are away.
'I can't say it was easy,' says Kath. 'There was a lot to think about and organise. We only had a car and a very small caravan to sleep in, and we were leaving behind our lovely house. The only thing Gareth missed was his long, hot baths.'
'People ask about my education,' says Gareth, 'but from the beginning, wherever we go, someone has always come to teach me. I follow the same books as everyone back at school and I've got a computer. I've never fallen behind my classmates.'
And the future? 'It was a difficult decision,' says Kath, 'but there was no other way to teach Gareth about being a clown. I'm happy to say it's working, and we're enjoying it.' And Gareth? 'I'm going to be the main clown in a circus one day', he says, 'perhaps Bippo's circus.'
Quiz 
CÓ THỂ BẠN QUAN TÂM