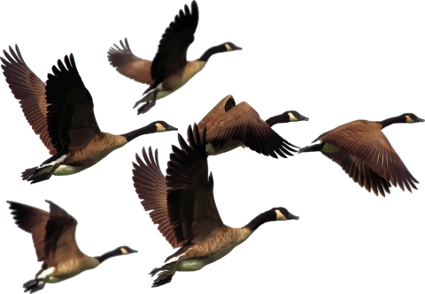 CANADA GEESE
Canada Geese are large blue and white birds. When autumn arrives, they have to fly south where the weather is warmer. The winters are so cold in Canada that the birds die if they stay there.
Last spring, Bill Lishman found sixteen young Canada Geese on his farm. They had lost their parents. Bill thought, 'These young birds won't know what to do in the autumn.' Bill had a small plane and he decided to teach the birds to follow him. All through the summer, he went on short trips in his plane and the young geese flew after him.
When the cold weather arrived in autumn, Bill flew to Virginia in the United States, 600 miles south of his home in Canada. The geese followed him all the way. Bill left the geese in Virginia and he returned home. This spring, Bill was waiting for the birds to come back. They didn't arrive, so Bill flew to Virginia to get them. He looked for them for two weeks but he couldn't find them. When he arrived back home, Bill found the geese waiting for him. They had found their way home without him!
__________________________________________
EXAMPLE