Read the text and questions below.
For each question, mark the correct letter A, B, C or D
Rock Band 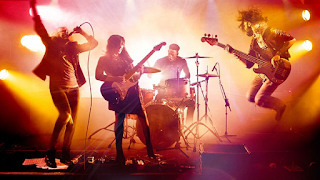 Two years ago, our 14-year-old son, Ben, asked us for a set of drums for his birthday. At first, we were very much against the idea because of the noise. 'It's better than watching television or playing computer games in my free time,' Ben argued, 'and it'll keep me out of trouble .' In the end we gave in. 'All right,' we said, 'but you must consider the rest of the family and the neighbours when you play.'
That was just the beginning. Because drums are not the easiest instruments to transport, the other members of Ben's band started appearing at our home with their guitars and other electrical equipment. And so, for several hours a week, the house shakes to the noise of their instruments and their teenage singing.
At least Ben's hobby has been good for our health: whenever the band start practising, my husband and I go out for a long walk. And I must admit that, although their music may sound a little strange, they are a friendly and polite group of young men. I cannot judge their musical skill- after all I didn't expect my parents' generation to like the same music as I did when I was a teenager- but they do play regularly in local clubs for young people.
Our main worry is that they won't spend enough time on their school work because of their musical activities, though this hasn't happened yet. I am always stressing to Ben how important his studies are. But one thing is certain - Ben was right: it has kept him out of trouble and he is never bored.
Quiz 
CÓ THỂ BẠN QUAN TÂM