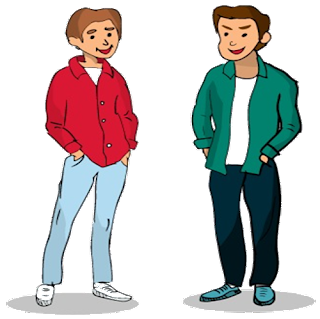 Frazer and Peter are two 14-year-old boys who grew up in the same small Canadian town. They have always been friends and classmates. Like all their other friends, they enjoy going fishing or swimming at weekends. But for the last few months, they've spent every weekend in Peter's room working on his laptop. This isn't because they have a lot of homework. They have made a new computer word game.

The idea for the game came from Frazer's little brother, Kevin, who had problems with his reading. Kevin learns words more easily by seeing pictures and hearing information than he does by reading. His brother wanted to help. Frazer and Peter worked together for over 200 hours to make a computer game and now it's ready to use. It's a speaking and picture game. For example, if you look at the word 'hat', there's a drawing of a hat next to it and you can hear Peter saying 'Hat! Hat!' at the same time.