The Invention of the Ice Cream Cone 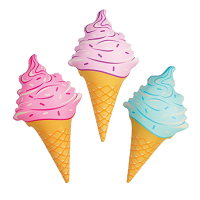 Do you like to eat ice cream on hot summer days? If so, what is your favorite way to eat it, in a bowl or in a cone? Do you know how the ice cream cone was invented?
The first cone was introduced at the 1904 World’s Fair in St. Louis, Missouri. There were many people selling ice cream there. One ice cream seller was a man named Arnold Fornachou. His ice cream was very delicious. Soon, he ran out of ice cream bowls. More people wanted to buy his ice cream, but he couldn’t sell it.
Luckily, Ernest Hamwi was there! Hamwi was selling waffles. He rolled up his waffles and gave them to Fornachou. Fornachou put his ice cream in the waffles and sold them to his customers. The ice cream cone was invented!
So next time you are enjoying this tasty summer treat with your friends, tell them about the beginning of the ice cream cone. Without this lucky meeting, summer wouldn’t be the same!