Read the text and questions below.
For each question, mark the correct letter A, B, C or D
Running Club for Women 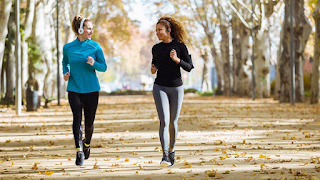 When I injured my back I had to take a break from my running career. I decided to introduce more women to the sport, to show them how much fun it can be and to give them the confidence to get out and run.
I decided to start a running club for women in my area because I was annoyed by the attitude of many race organisers. They complain about the lack of women in the sport but also use this as an excuse for not providing separate changing facilities.
I put up posters and 40 women, young and old, fit and unfit, joined. All of them were attracted by the idea of losing weight but I don't think they had really thought about running before. When or if they did, they had a picture of painful training. They didn't think of chatting and smiling while running in beautiful places, like by a river.
At first they ran for only a minute - now they can run for thirty minutes. They've also learned from other runners about diet and keeping fit in general.
I wanted to do something for women's running and I've had so much pleasure watching their progress - almost as much as they've had themselves.
Quiz 
CÓ THỂ BẠN QUAN TÂM