Read the text and questions below.
For each question, mark the correct letter A, B, C or D 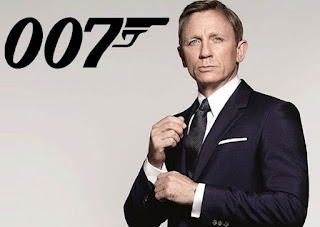 One to watch!
Essay by Jessica Bourne, aged 14

I'm a big fan of films featuring the spy James Bond. I've got most of them on DVD. We've recently bought Quantum of Solace, in which Daniel Craig plays the part of Bond. I don't know why the film's got that name- but it's a great movie, anyway.
All the actors who've played James Bond have been great, but Daniel Craig, who's made lots of other films, plays the part better than any of them. Even though he doesn't talk very much, I think he's the most perfect actor for the role. He even does a few of the more dangerous things in the film himself, instead of getting someone else to do them. I did wonder sometimes whether he'd be clever enough to defeat the bad people -but I'm not going to tell you the ending! The actress who stars with Craig gives a fantastic performance too- I loved all the glamorous clothes she wore!
The director probably had a hard job making this Bond film as full of action as earlier ones. But the excitement starts right at the beginning here, with a car chase along a mountain road, and plenty of other thrilling scenes, too - Bond leaping off tall buildings and so on. Unfortunately I found the story difficult to follow in places, and it also seemed to be over very quickly- it lasted under two hours. I also felt there weren't as many jokes as in the old Bond films. And where was all the ridiculous Bond equipment - the underwater car or exploding watch that everyone laughed at? This is a more serious, darker Bond film, but I still really enjoyed it.
Quiz 
CÓ THỂ BẠN QUAN TÂM