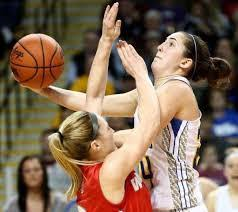 Susanna Brightman is a young Australian basketball player. She is 195 cm tall, and very fast and strong. Some people say she may become the best player in the world one day. As well as playing for her own country, she plays for a team called Boston Hawks in America.

Susanna was born on 15th June 1992. Her mother and father were both basketball players and when she was just 2 weeks old she was already travelling around the country with them while they played basketball. When she was still very young, Susanna told her parents she wanted to play for Australia. At the age of 16, she played for her country for the first time.